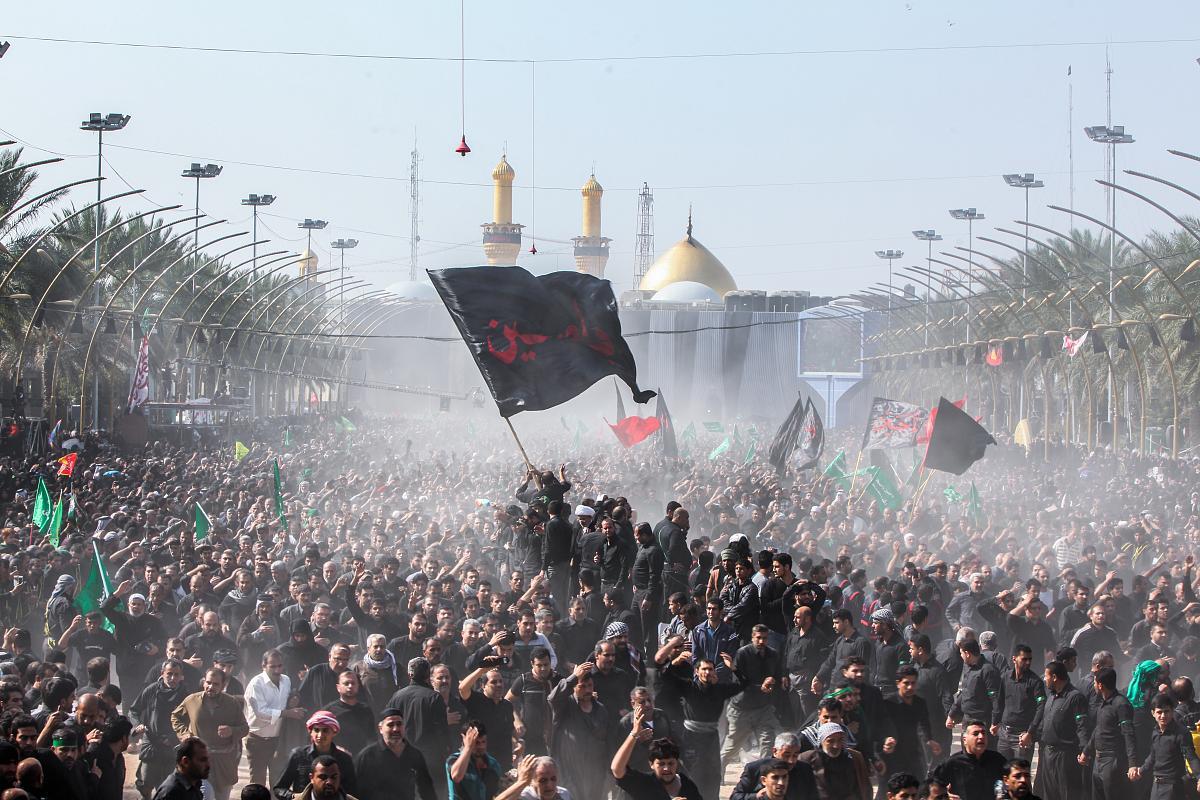 The recent bloody attacks by extremist groups on innocent civilians in Ankara, Brussels, and Lahore have provoked outrage across the globe. In an effort to understand the ideology of one such group, ISIS, it is perhaps fitting to look back five months to the 1335th annual Shia commemoration of Ashura, as a reminder that the victims of ISIS’ politics of terror are often Muslims themselves.

On October 24th, 2015, defying bullets, bombs, and hostile glares from ISIS and its supporters, Iraqi Shias marched to the holy city of Karbala for the commemoration of the martyrdom of Hussain ibn Ali, the grandson of Prophet Muhammad, and the son of Ali ibn Abi Talib, whom the Shias follow as their first Imam and caliph. This ritual is widely observed in the Shia world, and marks a primordial facet of the sect’s identity: every year on the 10th of Muharram, also known as the day of Ashura, believers clad in black march to mourn the martyrdom of Hussain as the saint who stood up for social justice, and sacrificed his entire family for the sake of humanity in the battle of Karbala.

In 680AD, Umayyad caliph Yazid ibn Mu’awiyah rose to power through corruption and violence, and demanded Hussain’s allegiance. Being a man of justice and truth, Hussain refused to give in to Yazid’s threats and rose against this religious, political, and social oppression. As he stated himself: “I am not rising against Yazid as an insolent or an arrogant person, or as a mischief-monger, or tyrant. I have risen against Yazid as I seek to reform the Ummah (Islamic nation) of my grandfather. I wish to bid the good and forbid the evil.”

Hussain then left Medina, the city of Prophet Muhammad, for the barren and scalding desert of Karbala. Along with his 72 loyal companions, including his friends and family members, he was left thirsty for three days under the burning sun, and brutally murdered by Yazid’s army of at least 30,000 men. Hussain and his men fell as martyrs, refusing battle until the very last moment.

The historical event of Karbala is not only remembered for its ferocity as a battle; rather, it has set the stage for countless human rights narratives that not only empower the Shia community, but also resonate with human beings around the world. Hussain and his family were denied water for three days. That same resource has become a weapon for ISIS to force resisting villages to give in to its rule. Hussain and his family were cruelly massacred for the values and beliefs they held. Today, ISIS is ruthlessly killing Shias and labeling them as apostates and heretics. Hussain’s women and children were looted, taken as war prisoners, and paraded through the streets of Kufa and Damascus. As of today, ISIS loots villages, and owns a flourishing slave market in which women and girls from religious minorities in Iraq are sold.

The teachings at Karbala have become faith’s weapon against injustice, and the revolutionary symbol of Hussain is the banner that Iraqi Shias are holding against ISIS today. Seen as infidels by the extremist group, the Shias are targeted for the perceived crime of being followers of Ali ibn Abi Talib and his progeny. According to a report by Human Rights Watch, ISIS has destroyed seven places of worship in June 2014, and frequently executes Shias, including through mass killings in the city of Tikrit. In July 2015, a car bomb killed 120 people in the town of Khan Bani Saad, where the population is mainly Shia. The accounts confirm that the group engages in selective killing, separating Sunnis from Shias after checking their identity cards, and does not make any kind of distinction between men, women and children, let alone combatants and civilians. The Shrine of Imam Hussain

ISIS’ treatment of the Shia population is at odds with not only the principles of international law, but Islamic tradition as well. The right to religious freedom, in private and in community, is enshrined in the Universal Declaration of Human Rights. It is emphasized in Article 18 of the Covenant on Civil and Political Rights, granting individuals the right to manifest their beliefs in practice, such as through rituals and processions. Additionally, the Islamic doctrine, which ISIS claims to follow scrupulously, protects religious minorities and defends their right to practice as conscience dictates. The Qur’an, which is the final word of God for all Muslims, summarizes the notion of religious freedom in one verse, among others: “let there be no compulsion in religion” (Qur’an 2:256). With its oppression of Shias and other religious groups in Iraq, ISIS undoubtedly violates human rights principles that are arguably too fundamental to be challenged by cultural relativism.

In the wake of this escalating persecution, Shia religious leaders have drawn strength from the symbol of Hussain. Ayatollah Sistani, the  foremost religious voice for Iraqi Shias, issued a strong statement in which he reminded the Shia resistance fighters of their obligations to uphold justice. Echoing the words of Hussain, he advised in his statement to, “strive to act in the same righteous manner as the Prophet and his progeny (…) let your righteous actions, your just conduct, and your sound admonition serve as an example for them. Do not resort to oppression.” Lebanon’s Shia leaders have often used similar rhetoric when speaking to the masses, urging Shias to continue resisting for the same values Hussain held – justice and freedom.

Hussain’s actions on the plains of Karbala 1335 years ago, and his unflinching determination to stand up for righteousness, serve as timeless examples for Shia believers fuelling the resistance movement to stand up against ISIS’ human rights violations in an ethical way. Although not all Shia militias have respected this condition, the core of the defense movement is nevertheless anchored to the notion of a just revolution, a standard set by the battle of Karbala.

In 2014, a supporter of ISIS tweeted, “Shiites, prepare yourselves for our bombs. Ashura is here and Karbala is not far anymore.” From Karbala 680 to Iraq 2015, the dynamics of horror today remain the same.

Roukhsar Nissaraly is currently a graduate student in human rights at Columbia University. Her research interests include Shiism, the rights of religious minorities, and the interplay between Islam and human rights.